skip to main | skip to sidebar

This is only the second such weekend ever to happen with this club, and like the last one, this was an outstanding success!! When I found out the scale of the trip, I was unsure whether or not it could be done, with a total of thirty-five people involved over a two day weekend, could our shed provide enough kit in the right sizes for everyone? Well, in a testament to Welsh organisation, we managed to escape from the seemingly inevitable situation where too many big people were on the trip to fit in the club kayaks, and managed to have one of the minibuses packed and away in under an hour. We’ll forget the fact that the other bus took two hours to pack…

After a quick trip to ASDA for supplies, and to a chippy in Bridge of Allen for food, we were off, up past Perth and towards Nethy Bridge. The bus journey was pretty chilled out and relaxed, with Radio 1 providing the majority of our music as we had made the school-boy error of forgetting both tape-deck and FM transmitter. Luckily, the music on the radio was good, and all was forgiven for that day. Arriving at 11pm, we were given a small tour of the bunkhouse, with Narnia, the Hobbit Room and the Drying Room drawing particular interest. An hour later the other minibus arrived, instantly breaking into the keg of beer which we had left alone (our second school-boy error of the day). After a small celebration of everyone arriving successfully, everyone went to their respective bunks (Tom and Caity in the “Someone got Lucky” room), and tried to get a good nights rest before the next days paddling.

The morning saw a rush to get food and drink before we got on the river. No, I lied, that was what was meant to happen. In reality it was another morning filled with good intentions of leaving by 9am, but as normal, we were about half-an-hour behind our hopes, and left for the Middle Findhorn’s uppermost get-in, arriving around half-ten. After a quick photo-shoot for the Lansdowne (where Ben was his normal camera-hogging self), we ran the shuttle and got onto the river. 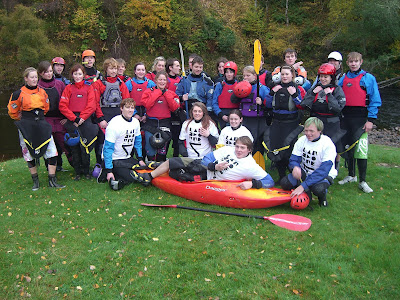 Our group led going down the Findhorn. The first rapid took longer than almost any other due to Harry’s set of repaired paddles disintegrating, and Cat having to run back to Rachel’s car to get another pair for him.

The next few rapids saw the number of swims in our group increase up into double figures, before we even arrived at the bridge that signalled the normal get-in. This point under normal circumstances would have taken about twenty minutes to get to…it took us over an hour! At this point, despite the steady swims, our pace increased all the way until Wall of Death, the first of two main rapids on the river.

Here was the first introduction to lines for the beginners, with Ben on the bank showing them where to paddle, and myself and Sean demonstrating and waiting at the bottom. Yet despite the ominous name, this rapid claimed none of the beginners – not one swim!

Unfortunately, Carnage Corner was not going to let us away so lightly. When we arrived there, everyone decided to run it, even those who had walked at Wall of Death. Three people swam there, our highest count for any section of the river, and we dropped from three freshers who had not yet swum, down to two. Adding insult to injury (quite literally), three people swam at the get-out, dropping our number of dry freshers to just one. 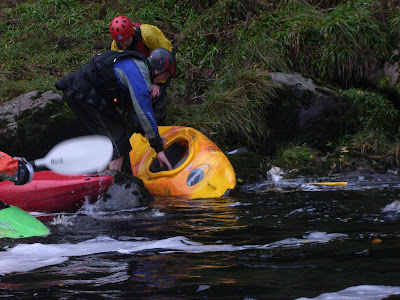 After getting out and packing up some of the kayaks we began the process of waiting for the other group…and waiting…and waiting. It was after six before we saw them again, walking down the road, having got off the river not wanting it to be dark while on the river.

Returning to our fantastic bunkhouse, a club meal was cooked by Louise and Christine, with Euan and a couple of others getting in the way where they could. This went down as well as any free meal ever has…with extreme alacrity! The pasta was followed by drinking games and discussions of the events of the previous day, as alcohol always helps the excuses flow. 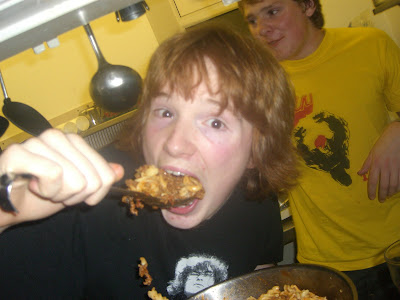 The following morning, the litany of alarm clocks once again roused the bunkhouse and a cleaning frenzy followed. In a testament to club efficiency, we found ourselves at the banks of the Findhorn before we could decide what river we wanted to do. Then, in an equal testament to club faff, we spent almost an hour running through the possibilities of which river to paddle, with many being the “chosen river” before the Spey emerged triumphant.

The Spey caused relatively little carnage compared to the epic on the Findhorn the day before, and everyone who had been in my group made their target of halving their swim count. Unfortunately, there was a swim by Callum, who had been the only fresher besides Harry to not swim on the Findhorn. However, the best was saved till last as Peter, swimming only a short way before the get-out, discovered he had swum to the wrong bank and wound up on an island, and had to swim across to our shore. These events were caught on film. 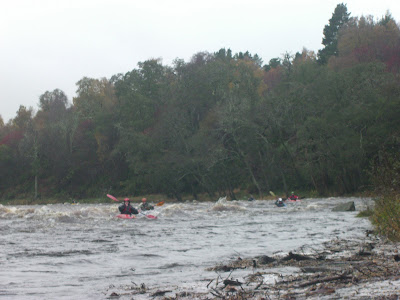 Everything that happened on this weekend, from the fantastic choice of accommodation, the epic (maybe even record) number of swims on the Findhorn, to the brilliant beginners who joined us, made this one of the best weekends kayaking I have been on in years!!

Swim fest on the Etive

I would like to begin by apologizing for the fact that this article/post/whatever it is may not be fully accurate in the exact number and order of swims, it’s just that there were so many that I don’t exactly remember but it should total roughly fourteen.

It was the first intermediate trip of the year so John, Michael, Euan, Gregor, Paul, Paddy, Sean, Mark, Rachel and myself headed for the only place there might be water, Glen Etive (Ali was supposed to come but was too hung over). Had something interesting happened on the journey I would tell you about it, but nothing did happen so we’re going to start at triple. The first swim came after the second drop after Paul had a minor back looping incident. The second drop also necessitated (not sure that’s even a word) a roll from Rachel, Mark and possibly Gregor. The third drop didn’t actually claim any swimmers but Mark needed a T rescue after a cavalier pencil straight down the middle approach to the drop.

Upon arrival at letterbox Sean decided to run it before we’d had time to set up bank safety, he swam and we laughed. I can’t believe that there was only one swim here but I can’t remember any more so we’ll have to move on to Ski Jump where no one swam. Then came Crack of Doom. Paddy went first and swam. Gregor went next and was so determined not to swim that he ran the very shallow rock slide after it on his head, then he swam. I think Sean was the only other swimmer at this point.

On the way down to Crack of dawn Gregor swam, causing me to shout ‘swimmer’ in a very unnecessary, high pitched way. At crack of dawn many of the group, instead of just seal launching, threw their boats in then had to swim after them, but we won’t count those as swims. Just around the corner was an unnamed rapid of absolutely no size or consequence, which caused carnage. Mark, Gregor and Paul all managed to swim while Michael, Paddy and I all had to roll (maybe Rachel did as well, I don’t remember). Rock slide went well, no swims.

Only John, Rachel and I were brave/ foolish/ drunk on a sense of invincibility enough to have a go at right angle. John went first and despite a roll at the bottom was fine. I went next and decided that it was time I chipped in for the swim count after boofing, capsizing, rolling, capsizing and finally not rolling (I lost a shoe in the process, so if anyone finds one it’s mine). Rachel pulled off a spectacular face plant which blew her deck, one more swim.

After running corner falls Rachel, John, Michael and I walked up to run the Allt a’Choariainn. Rachel had clearly developed a taste for both face plants and swimming as she did both following a spectacular upside down landing off Speed. Next came Extacy, Michael rolled and Rachel swam. Only Michael and I did pinball and remarkably there were no swims just a lot of rock smashing. We finished the day with Chasm which Rachel ran straight into a rock and swam.

I’m sure I’ve missed a swim or two so I would urge anyone who’s swim was not mentioned to come clean and post it on the forum in the appropriate place.
Posted by Glasgow Uni Canoe Club at 06:41 No comments: